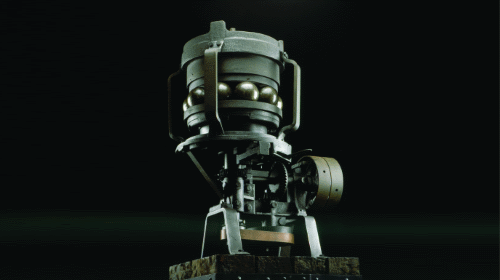 After a long series of laborious and costly tests, metalworker and turner from Schweinfurt, Friedrich Fischer, succeeded for the first time in 1883, using his own invention the "ball grinding mill", in manufacturing large volumes of hardened steel balls, which were of equal size and perfectly round. 125 years ago, on July 17, 1980, Fischer received the patent number 55783 for his ball grinding machine from the Imperial Patent Office.

By fitting hardened steel balls into the bearings of bicycles, which Fischer produced himself in Schweinfurt, he ensured that they ran smoothly, and thereby made them attractive for his customers. At that time, these steel balls were manufactured by hand on turning machines in England. They were not very precise, which meant that they were susceptible to breakage and they were also expensive. This is why Fischer started to experiment with manufacturing steel balls on machines he designed himself. The breakthrough came in 1883. From 1883, the first ball grinding mill developed by Fischer made it possible to manufacture balls with a precision of up to 0,020 millimeters, that is 20 µm.

Whoever takes a closer look at the ball grinding mill will recognize Fischer's ingenious idea: Above the untreated balls for machining, there is a grinding wheel that rotates slightly eccentrically. This means that the spherical axis of rotation is tilted by approx. 1.9 degrees from the machining plane – in this case from the horizontal machining plane. Each ball rotates approximately 30 times around its almost horizontal axis, while it rotates once around its vertical axis. As a result, the ball's entire surface is covered by the tool and everything that protrudes is machined off until the ball has reached the virtually ideal ball form at the end of the machining process.

Production rose in subsequent years; as did the number of employees. In 1887, two men, who would soon shape the history of rolling bearings, joined Fischer's company: Engelbert Fries and Wilhelm Höpflinger. The milling machine designed by Höpflinger in 1888, made the production of balls even more cost-effective and efficient. However, disagreements led to Fries and Höpflinger parting with Fischer in 1890, and on May 15, 1890 they established their own company. Höpflinger built a replica of the patented "ball grinding machine" and Fischer took it to court. In its wisdom the court made a compromising judgment and ruled the following: Fischer was confirmed as the patent owner and Höpflinger was granted license free right of use.

Meanwhile, Fischer's "Erste Automatische Gußstahlkugelfabrik" and Fries & Höpflinger had gone from producing balls to producing compete ball bearings. At the turn of the last century, there were a wide range of smaller companies in Schweinfurt, who had recognized the prospective importance of the rolling bearing for further industrialization and the rapidly growing motorization.

Fischer's trademark, "F'AG", which stands for "Fischer's Automatische Gusstahlkugelfabrik" (the genitive apostrophe was still commonly used in 1905 and was retained in the logo until 1962) is still renowned worldwide. The principle of Fischer's and Höpflinger's invention, the centreless grinding of balls, is still used today by all ball manufacturers.