Fast start-up for Energiron plant at Ezz Steel in Egypt

On December 20th, 2015 the new Energiron Direct Reduction Plant, installed in Ezz Rolling Mills (ERM) – Egypt, successfully passed the Performance test at the first trial just one month after the plant start-up. The new Cold DRI plant, featuring the Energiron III technology, produced its first DRI on November 22nd, and passed the Hot Test on December 2nd. After the Hot test completion, the plant, ready to increase its productivity, has been forced to work at reduced rate, due to limitations in the natural gas availability from the national network.

The natural gas full availability was restored on December 14th and the plant has been successfully and quickly ramped up to its full productivity, allowing to declare the performance test start on December 15th, only 13 days after the Hot Test completion. The test lasted 120 hours, during which the plant performed well above its target figures. The productivity was 112% of the guaranteed value showing a metallization >94% and a carbon content >3%, a feature achievable only with the Energiron technology.

Natural gas specific consumption of 2,57 Gcal/t and Electric Energy of 30 kWh/t complete the picture of an optimized technology with respect to overall energy consumption.

One of the most peculiar characteristics of the Energiron is the raw material yield. The ERM plant showed an impressive ratio of 1.37 t of oxide per t of DRI and is able to process oxide pellets or lumps screened at 3.2 mm, minimizing the rejected portion. All these results in the lowest Opex nowadays achievable in the DR technology panorama.

The total plant production already exceeded 110 000 t in less than one month of operation, corresponding to 66% of the learning curve. The hourly production rate has reached 262 t/h, corresponding to an annual productivity of 2.1 Mtpy, more than 10% above the guaranteed value of 1.9 Mtpy.

The client expressed its full satisfaction and acceptance of the plant performance, recognizing the expertise of Danieli and Tenova, which, in partnership with the professionality of ERM team, allowed achieving this important milestone. 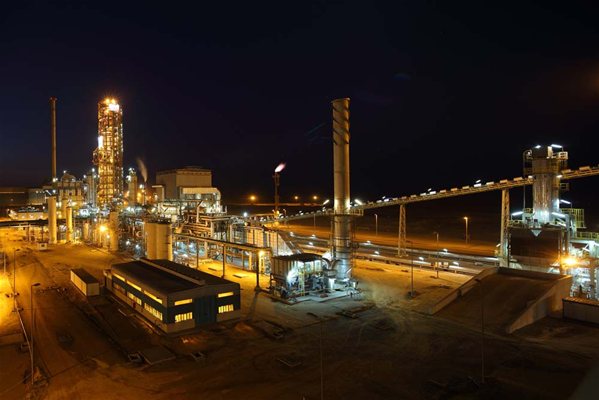