Machinery that repairs itself

In the EU-funded project SelSus, Fraunhofer scientists are collaborating in a consortium with partners from research and industry to develop maintenance technology capable of forecasting machine downtimes in production before they occur. This allows plant managers to rectify faults before the machine breaks down. The system even corrects some defects automatically. 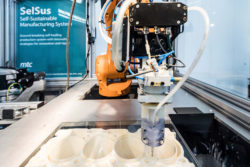 Unforeseen machine failures during ongoing production – plant managers dread them, technicians detest them and managers just sigh and factor them in. Such incidents prompt frantic repairs, drive up costs, adversely affect delivery reliability and ultimately weaken companies’ competitiveness. Yet often the problem is only a small defect or normal wear and tear. However, if left undetected, these can lead to major disruptions and production downtimes.

What would be helpful is a diagnostic procedure capable of monitoring the status of all components in the production line, identifying problems and weak points and informing the responsible employee in a timely manner. Based on what’s known as a decision-support system, maintenance personnel can then reach a decision and take targeted action to repair the defect. Ideally without having to interrupt production.

Precisely this is one of the underlying ideas, albeit not the only one, behind the ambitious SelSus project within which the Fraunhofer Institute for Manufacturing Engineering and Automation IPA is currently researching. “The aim is not just to monitor the status of the machines and components. Using intelligent software and sensor networks, the plan is to detect potential weak points or signs of wear and tear early enough for the system to be able to predict potential malfunctions,” explains Martin Kasperczyk from Fraunhofer IPA. The developed diagnostic models also directly provide suggestions or recommendations on how to rectify the problem. Project partner Electrolux in Pordenone, Italy, uses such a decision-support system. The system is capable of predicting with a certain probability potential failures on a press for washing machine facings and of diagnosing actually occurring malfunctions. The data needed to monitor the machine status is partially provided by sensors. They measure values such as energy consumption, temperature, oil pressure, particles in the oil or vibrations. Fraunhofer IPA and the participating consortium have also proved that the technology functions reliably in practice.

The system repairs itself

The system is even capable of sending control impulses to individual machines. A welding control on which a sensor has failed, for instance, can continue to work almost seamlessly in a secure mode, without any serious disruptions. The capability for self-repair and sustaining production has also given the project its name. The full project title of SelSus is “Health Monitoring and Life-Long Capability Management for Self-Sustaining Manufacturing Systems.”

However, first a number of technological hurdles had to be overcome. Martin
Kasperczyk says: “One of the biggest challenges was analyzing the flood of data. After all, we’re talking here about predicting malfunctions or breakdowns of machines with a high degree of reliability. You don’t get there just by programming a couple of algorithms.”

The experts are putting their faith in Bayesian networks. A Bayesian network is a mathematical model that can be used to compute the probabilities of a certain event or state occurring. The model represents a set of variables and their conditional dependencies. With the help of the data collected by the sensors, the software for example computes the probabilities of a specific high-stress cable breaking in the near future and, where applicable, signals that it should be replaced.

But the SelSus software relies not only on sensors. It also takes the technical characteristics of the machine and its performance parameters into account. This data has to be captured during installation and configuration of the system. Moreover, an extensive test run tells the system how the machine and its components behave in continuous operation and under load. Only then is it ready for use. The software also registers new data, for instance as a result of machine upgrades or deterioration in performance due to wear, enabling the system to learn.

The complexity of the SelSus concept is also evident from the fact that the software even interacts with operators by analyzing the causes of potential or existing mal-
functions and proposing an appropriate course of action.

A system with self-healing capabilities from Coventry

Project partner The Manufacturing Technology Centre from Coventry, UK, has created a system with self-healing capabilities. In an engine production plant, a dispenser is attached to a robotic arm by means of vacuum. If the dispenser encounters resistance, rather than snapping off, it reacts flexibly. It loses the grip produced under vacuum and drops a few centimeters until it is stopped by springs. The springs then draw the dispenser back to its original position. Subsequent calibration ensures the tool is in the correct position – and after the brief interruption, the work process continues.

Politicians have long recognized the potential offered by the technology. SelSus has received nearly 5.4 million euros in funding from the European Commission. In addition to Fraunhofer IPA, the project consortium includes renowned industry partners such as automaker Ford, household appliance manufacturer Electrolux, welding technology provider HWH Hamburg and automation specialist IEF-Werner. Other participants are universities, such as Loughborough University and the Instituto de sistemas e Robotica, or ICT providers including HUGIN EXPERT, Advanced Data Processing or Inotec, to list but a few.