The French "Union des Forgerons" ordered from Siempelkamp an open-die forging press and a ring-rolling mill for its plant in Méréville. With the two plants, which will be components of a new ring-rolling line, the customer intends to expand its product range with parts made of nickel-base alloys and titanium as well as difficult to form metals for the aerospace industry. In this way, the customer wants to significantly increase its production capacity. The new line consists of an open-die forging press and a ring-rolling mill as well as furnaces and material handling equipment.

The 33/30 MN forging press is uniquely designed as a combination open-die and ring blanking press and consequently, will provide high flexibility. In addition to producing blanks for the manufacturing of rings, the customer will produce conventional open-die forgings with a weight of up to 10 metric tons. Due to the precisely operated lifting and centering device, the press achieves high accuracy for the blank punching and piercing operations.

The ring-rolling mill which processes the ring blanks from the forging press has radial and axial forces of 4,000 kN each, with a maximum ring diameter of 2,500mm. The mill rolls rings with a height of up to 700 mm and weights of up to 5 metric tons. Siempelkamp will supply the entire ring rolling machine including the hydraulic system, electrical system and rolling dies.

The "Universal Cassette Design" allows the use of different main roll configurations in the same machine. The cassette principle provides the customer with a high degree of flexibility in production and allows high throughputs even for small batches because the cassette can be exchanged within 30-50 minutes.

By using design principles that have proven effective in other Siempelkamp presses, the machines achieve a long operating life. Extensive FEM calculations are the guarantee for the high fatigue strength of the mechanical structural components. This is further supported by the fact that the housings for the axial cones, which experience high mechanical stresses, are designed as one-piece castings without weld seams. Similarly, all bearings are designed with a long operating life in mind.

The Siempelkamp control SicoRoll 2.0, specially developed for ring-rolling and recently further developed with new features, allows exact control of the ring-rolling process. Furthermore, the saved rolling strategies support the user during process planning. With an advance simulation, which is taking the threshold values of the machine into account, all relevant rolling parameters are determined. The program uses a database which stores the tool and material data. Furthermore, it contains the standard rolling curves and strategies as the basis for the planning process. The calculated rolling parameters are transmitted to the machine control which ensures the optimal ring rolling process and keeps the rolling parameters synchronized with the process.

The entire project is carried out by a consortium made up of three companies. Siempelkamp will supply the mechanics for the open-die forging press, Oilgear Towler will contribute the hydraulic and electrical systems. The ring-rolling mill is completely supplied by Siempelkamp including the electrics, hydraulics, and the control system. Glama will supply the charging manipulator, the forging manipulator as well as a rail-bound forging robot for the transfer of the ring blanks between press and ring-rolling mill. This partnership has proved to work effectively for several projects in France in the past, for example, at Akers in Thionville or at Aubert Duval in its Firminy and Issoire plants. 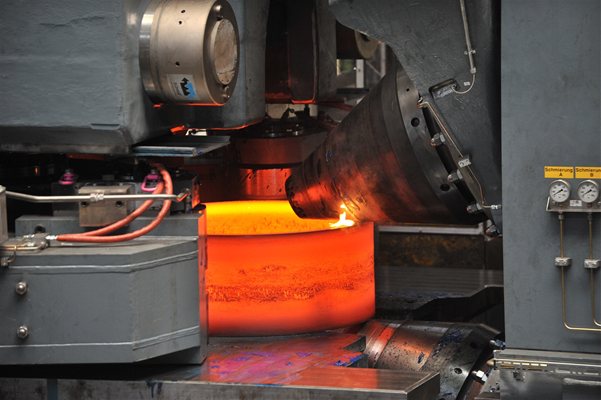