After more than two years of planning, today the final location decision was taken during the Supervisory Board meeting of voestalpine AG: the most advanced special steel plant in the world, representing an investment of EUR 330 to 350 million and designed to supply the most demanding customer segments, will be erected in Kapfenberg, Austria, where it will replace the existing plant from 2021. Securing around 3,000 jobs in Styria, this major investment by the High Performance Metals Division of the voestalpine Group marks a technological milestone in the manufacture of pioneering high-performance steels for the international aerospace, automotive, and oil & gas industries.

Work will begin on structural preparations right next to the current works premises for the EUR 330 to 350 million investment before the end of this year. The groundbreaking ceremony will be held in 2018, and after three years of construction the high-tech plant is scheduled to commence operations in 2021, replacing the current Böhler special steel plant in Kapfenberg.

"In times of global overcapacities, even in the special steel sector, we are again driving new technology and quality standards in high-performance steels with the construction of this plant. The decision to invest a total of EUR 330 to 350 million to construct the plant in a high-cost country such as Austria was anything but simple. However, after having intensively weighed all the relevant location factors, we were finally convinced that this investment project which is exceptional not only for Austria but also for Europe will pay off over the long term. The decisive factor was the people: in the end our employees, with their extensive expertise and their commitment, were a stronger argument than all the critical aspects. However, we are assuming that the clear political signals indicating reliable and predictable Austrian, as well as European, framework conditions for climate and energy policy which have recently been issued will remain unchanged, even after this decision. Only with a sustained and predictable industrial policy which is more than just an electoral promise will we, as a company, be able to create and preserve safe and attractive jobs over the long term." ( Wolfgang Eder, Chairman of the Management Board of voestalpine AG )

Another important factor in deciding to locate in Kapfenberg was the outstanding metallurgical research environment, as well as the available infrastructure, and proximity to important customers. 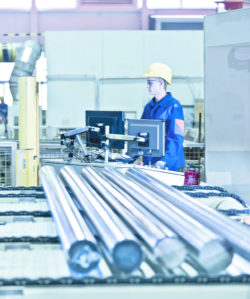 With the high-tech plant it will be possible to fully automate the production of tool steels and special steels for the most sophisticated applications. They are the starting materials for processing into extremely high-load-bearing and weight-saving aircraft parts, robust tools for the automotive industry, equipment for the demanding conditions of oil and gas exploration, and for manufacturing components using 3D printing.


"The new special steel plant gives us an unparalleled, global innovative edge, both by digitalizing our processes and by continuing to raise the quality of our products. We have always been aware of the strength of our traditional base in Kapfenberg; the question was its economic efficiency in light of the global competition. Therefore we are particularly pleased that today’s decision has confirmed this, and we can offer attractive, long-term future perspectives to our 3,000 highly-qualified employees and their families here at Kapfenberg." ( Franz Rotter, Member of the Management Board of voestalpine AG and Head of the High Performance Metals Division)

The new plant will also be the global benchmark for environmental and energy efficiency. Closed cooling water circuits and efficient heat recovery and de-dusting systems help to conserve resources and minimize emissions. At the core of the plant is an electric arc furnace, operated using electricity generated from 100 percent renewable sources, which melts down ultra-pure scrap and alloys into liquid materials. The production capacity is around 205,000 tons of high-performance steels a year.