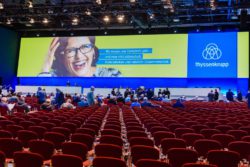 The non-governmental organization CDP (formerly Carbon Disclosure Project) has named thyssenkrupp one of the world's best companies in climate protection for the third time in succession. The award will be presented in Brussels on 19 February.

CDP’s scoring system assesses whether companies have formulated a coherent strategy on how to further improve their own environmental performance as well as that of customers and suppliers. thyssenkrupp once again achieved the highest score possible and was placed on CDP’s global “A List”. The list includes around 130 businesses worldwide and only fiveDAX companies.

Several thousand companies worldwide took part in the program, which CDP conducts on behalf of more than 650 institutional investors with assets worth almost USD90 trillion. The organization holds the world’s largest collection of corporate climate data and is regarded a benchmark in the capital markets.

When it comes to climate protection thyssenkrupp focuses on continuous efficiency improvements and long-term innovation leaps – both for its customers and its own processes. "Despite the major global challenges, we are optimistic. With our resource-saving products and processes, we see climate change as an opportunity and are making our contribution to achieving the climate targets," says Reinhold Achatz, Chief Technology Officer at thyssenkrupp. "The third award in a row shows we're on the right track."

With Oxyfuel, for example, thyssenkrupp has developed a solution which efficiently captures CO2 during cement production

Another example is steel production. There, thyssenkrupp is pursuing a two-pillar strategy to achieve a sustained reduction in emissions - the utilization of greenhouse gases generated during production and strategies for their avoidance. "On the one hand, we are focusing on the Carbon2Chem project, with which we can convert production gases into fuels such as methanol, for example. We have already made good progress here.

The next step is the large-scale expansion of the already proven technology. At the same time, we are working on a conversion to hydrogen-based steel production," explains Achatz.

"We are convinced that there will not be just one technology. This is why we are open to new technologies and pursue different routes.”

Further examples of thyssenkrupp's portfolio of climate protection solutions can be found on the "Good news for optimists" website: