Topic of the month

If it were up to visionary Elon Musk, Hyperloop would be the transportation means of the future. It is expected to be as fast as an airplane and as comfortable as a train. His vision of the futuristic transportation system: pods that shoot through a tube at speeds of up to 1,225 kilometers per hour.

Tesla founder Musk organized a global contest in which universities and freelance engineering teams were invited to compete for the development project. voxeljet assisted RP2, a prototype manufacturer and partner to Delft University of Technology, with the future project. As a leading supplier of large-format 3D printers and on-demand parts services, voxeljet supplied the team from the Delft University of Technology with PMMA (polymethyl methacrylate) patterns for casting components of the transport pod.

The Dutch team had previously taken second place in the first round of the contest with their idea, winning out against more than one hundred teams. They conceded defeat only to the U.S.-based MIT (Massachusetts Institute of Technology). The participants from universities in Wisconsin, Virginia and California came in third. During the second phase of the contest, the three best teams were allowed to reconstruct their designs for the Hyperloop capsule true-to-scale as a 1:2 model. 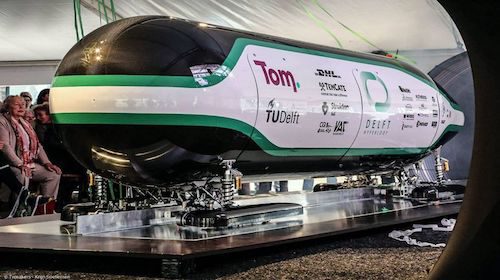 Shaped like a water droplet: The Delft Hyperloop pod was given an aerodynamic shape and resembles a water droplet—the optimum shape for low drag/ © Voxeljet

The Delft team went looking for a partner to produce the aluminum parts for the pod suspension system, with their complex shapes, using the investment casting process. The team chose prototype manufacturer RP2, which has partnered with the university for years on various projects. RP2 brought the 3D printer expert voxeljet on board in a support capacity.

The PMMA (polymethyl methacrylate) patterns for the casting process were printed on a VX1000 system in the voxeljet service center in Friedberg, Germany. The universal 3D printer is well suited to various industrial applications and makes it possible to economically produce everything from individual parts to small batches.

With a build volume of 300 liters (1,000 x 600 x 500 cubic millimeters), all 25 casting patterns needed were produced in a single printing operation lasting less than 24 hours. The components' high degree of detail was achieved with a print resolution of 600 dpi, combined with a layer thickness of only 150 micrometers. 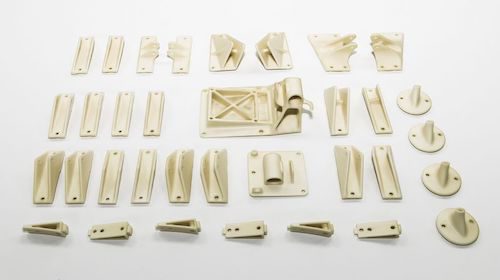 Perfect for casting: The 3D-printed PMMA patterns were infiltrated with wax/ © Voxeljet

The 25 different components were sent to RP2 for casting. The manufacturer used the vacuum casting process. Mike de Winter, CEO of RP2, has this to say: "The PMMA material worked very well for our purpose because it burns out with a very low ash content. It doesn't expand on burnout, so there is no risk of cracks forming in the ceramic shell. The material also results in an outstanding casting quality."

The printed patterns were mounted on a wax tree for the casting process. The tree was embedded in ceramic, which was then placed in the oven for hardening. The aluminum could be cast once the wax and the PMMA casting molds had been burnt out. In the end, the aluminum was subjected to a T6 heat treatment, which improved the strength and made further processing easier. "Despite the small volume, we were able to produce the complex investment casting patterns cost-effectively and within a short period of time, thanks to the 3D printing technology," explains Florian Rauscher, the project manager with voxeljet Customer Services. 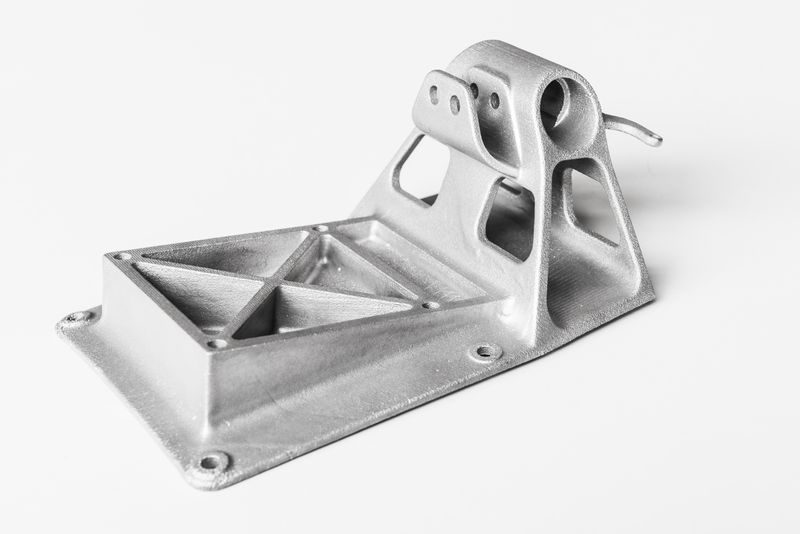 The PMMA patterns are attached to a wax tree, cast and separated into the final individual parts after heat treatment/ © Voxeljet
Source: © Voxeljet 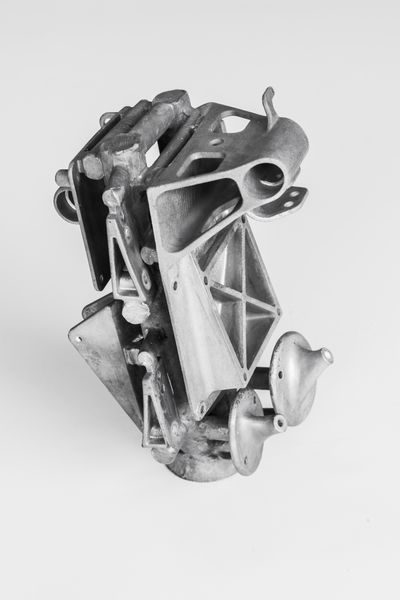 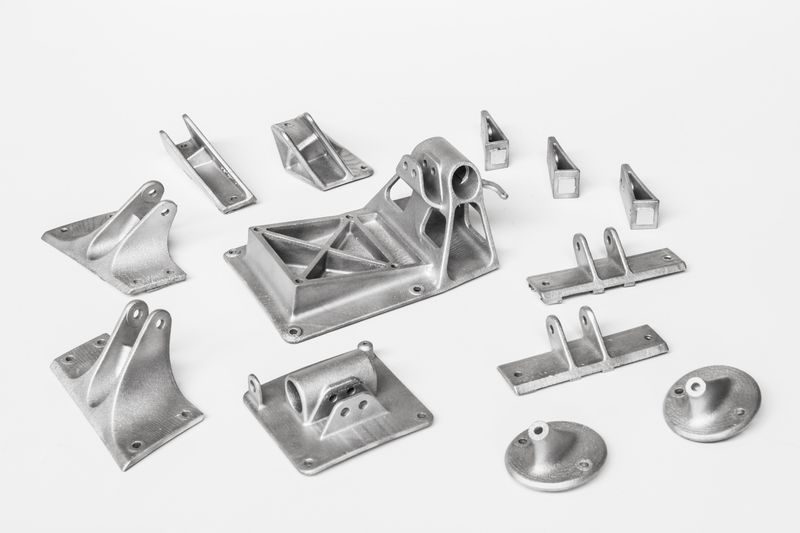 The results are clear to see: The Delft Hyperloop pod is safe, fast, reliable and efficient. The 1:2 scale model can reach speeds of more than 400 kilometers per hour and is able to transport both passengers and luggage. With a mass of only 149 kilograms, the pod has a light-weight construction. 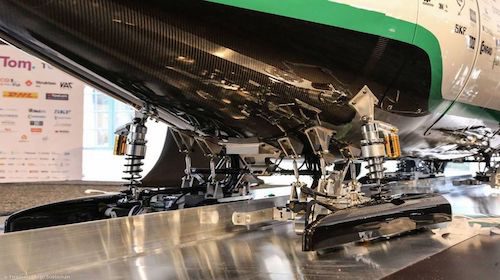 Although there is practically no air pressure within the tube, residual drag does prevail, due to the pod's high velocity, which is close to the speed of sound. This was also the reason why the Delft Hyperloop pod was given an aerodynamic shape. As can be seen from the illustrations, the pod resembles a water droplet, since this is the optimum shape for minimizing drag.

However, this led to another challenge: the suspension had to be aerodynamically connected to this organic shape, since it is nearly impossible to mill a curved or doubly curved surface. The Delft team solved this problem by using the casting method, which has extensive design options. 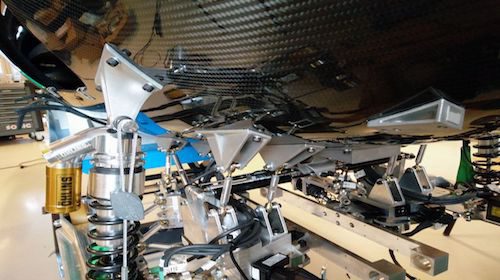 Pods shoot through tubes at close to the speed of sound

A brief note on the vision of the transportation means of the future: The plan is to build two parallel tubes on reinforced concrete pylons, within which pods with 20 to 30 passengers on board move in a partial vacuum. To reach high speeds, the pods will travel on air cushions. This will require the pressure within the tubes to be maintained at around 100 pascal, one thousandth of normal pressure.

The original Idea of Elon Musk was to travel upon ‘air cushions’. After an extensive evaluation, the Delft Hyperloop Team chose to ‘float’ based on magnetic levitation. The reason for this is that there a bigger gap between the wall of the tube and pod. Meanwhile, almost all other Teams in the competition decided to use magnetic levitation.

As a result, this transportation system would require only a fraction of the energy consumed by conventional means of transportation. This extremely low drag means that almost no driving force is needed to accelerate the magnetically driven vehicles, which would dramatically cut the cost of building and maintaining the infrastructure. The Hyperloop is a technology that could achieve high speeds with little impact on the environment.

The delft hyperloop team: the best of the best

The Delft Hyperloop team consists of 30 members from all academic departments of the Delft University of Technology, who were chosen as the best candidates from a pool of nearly 200 applicants. This team participated in the "SpaceX Hyperloop Pod Contest", which Elon Musk organized in 2013 because he didn't want to carry out the Hyperloop project on his own. The Dutch team built a safe, fast and cost-effective vehicle model, based on a unique design and suspension mechanism. A half-scale model of the transport pod will be sent through the SpaceX test tube in California in January 2017.


Helping to shape a piece of hyperloop future

RP² has been purchasing investment casting patterns from the voxeljet 3D printing service center for several years now. voxeljet was once again the first choice as provider of the necessary investment casting patterns to assist with the Hyperloop project. "This is certainly not an everyday project," says Florian Rauscher, the project manager at voxeljet Customer Services. "We are delighted to be involved in this transport concept, which may allow us to travel from Munich to Berlin in only 30 minutes just a few years from now."

Although the Delft team lost to the winners in a tight race during the first round of the Hyperloop contest, they will have another chance to prove themselves with their Hyperloop pod on the test route in California in January 2017. No matter who ultimately wins the race, it is an honor for voxeljet to be part of the Hyperloop project.