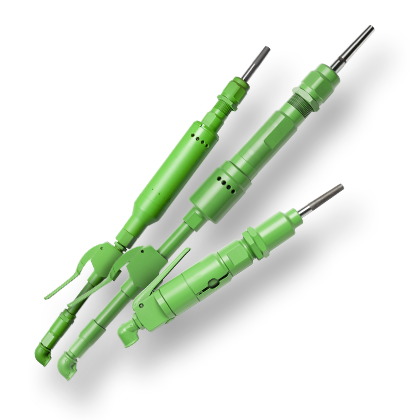 This company is main exhibitor of

Registration is required to use the networking service and a separate registration for matchmaking. Please register for Matchmaking first.

Welcome to Matchmaking. Would you like to get in touch with ?

Decoring and core breaking station for castings with an aditional turning unit. Used for castings that cannot be comletely emtied in the hammering station but no addidional vibrating is necessary. Our F+K decoring hammers breaking the core and setting up vibrations to the casting. At the same time the castings can be turned up to 270° to remove residual core sand.

Decoring and core breaking station for castings. Used if no turning or vibrating is necessary. Especially designed for the rough conditions in foundries. Our F+K decoring hammers breaking the core and setting up vibrations to the casting.

The world's most powerful decoring station. Acceleration values up to 30 g ensure a clean and fast decoring result. One excenter shaft is driven by two servo-controlled three-phase motors to generate the vibrations. The Vibro can be combined with a hammering station or integrated F+K decoring hammers. 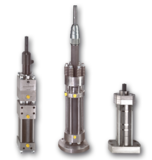 and exceptional service are the basic principles of today’s business philosophy.
We reflect a long tradition in the manufacturing of pneumatic tools.

From our beginning with pneumatic hammers above knocking units, up to the decoring stations used today, we have accumulated many years of experience which help us to support you.
With our decoring stations for Aluminium and Iron castings we can offer you a variety of solutions to achieve an economical decoring process, guaranteed cleanness and positive working conditions (under respect of security regulation)

In each case the ideal station

Customers all over the world trust in our decoring equipment. Regardless of small, medium, or large production volumes we develop the suitable concept together with you. We provide solutions from manual loading stations to fully automated cells. Quick retooling and short cycle times are part of our daily business. Our decoring machines are manufactured and assembled in our facility in Wuppertal, Germany. 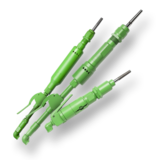 We offer pneumatic sand rammer  in a variety of weight classes (up to 5 kg, up to 10 kg and up to 15 kg) for light to heavy tamping work. Pneumatic sand rammer are used anywhere where semi-moist or dry masses, construction materials, molding and filling materials have to be compressed and solidified. Depending on which material you want to compress and which degree of density and solidity you want to reach, you need a lighter or heavier sand rammer with a shorter or longer piston stroke.

Easy-to-handle rammers are ideal for workbench work and lighter applications in the cement processing industry and in foundries. You can also use a pneumatic tamper to compress insulation materials (e.g. heat insulation loam or pour-in insulation in hollow walls, interior or facing formwork). 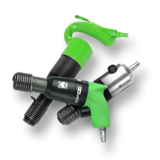 The compact and easy-to-handle F+K chisel hammers up to 4 kg are ideally suited for light construction, prying and demolition work in the construction sector and when performing renovation and restoration work. In metalworking shops, car repair workshops and in chassis construction, the small, but extremely powerful pneumatic tools are used to separate welding seams, welding points or flangings and to release stuck screws.

Depending on the plug-in tool used, the small chisel hammer is suitable for derusting, trimming and light riveting work. In the industrial sector, e.g. in the steel processing industry, it is used for cleaning steel blocks and foundry products (gray, steel and malleable cast iron), removing casting burrs and deburring edges, plastering and chiseling containers, boilers and hull walls, cleaning industrial furnaces, casting ladles and crucibles and decoring.

The small chisel hammer from Frölich + Klüpfel is very comfortable in the user’s hand due to its light weight and ergonomic design. Additional features 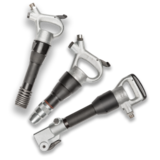 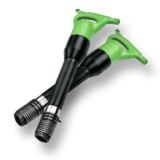 With the powerful pneumatic riveting hammer, you can also drive in locking pins which you would otherwise have to hammer in by hand. Especially for heavy riveting work, the right pneumatic tool accelerates the work and makes it much easier and also increases work safety and accident prevention.

You can find details about the different pneumatic hammers and pneumatic tools in the production descriptions and data sheets. You are welcome to call us and send us a message with your request if you want a personal consultation or require a special tool. 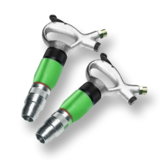 The small demolition hammer is a very diverse device. In the steel processing industry, e.g. in foundries, smelting and steel works, the easy-to-handle pneumatic tools are used to clean, deburr and decore caste parts and to clean industrial furnaces, etc. 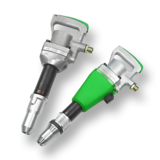 Strong, robust and heavy picks, breakers and demolition hammers are used, in particular, for road, tunnel and rail construction, in the industry and for tear-down and demolition work. Medium or light pneumatic hammers with which you can also work horizontally are also suitable for renovations and alterations.

You an find the right pneumatic hammer for your project or factory. Select the right unit based on the area of use and equip it with the right plug-in tools for demolition, breaking, tearing open, prying or chiseling.

You will find the right tools (e.g. chisels) and professional accessories for the pick and demolition hammer of your choice in our other categories. We will gladly consult with you on our range of products. 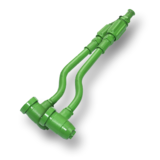 The pneumatic rust chisel is an easy-to-handle special tool for cleaning and/or abrading various surfaces. You can use the impact device on the plug-in side to completely remove rust, all types of paints or lacquers in a time-saving and economically-efficient manner. Concrete, stone and metal surfaces can be thoroughly cleaned and prepared for the next work step.

In industry, rust chisels are used to clean industrial furnaces (coke ovens) and boilers (knocking off boiler scale), etc. In stone processing, they are used to abrade concrete, synthetic and natural stone. Rust chisels are also used in vehicle, repair and restoration workshops. Due to the slim design, you can reach and work on hard-to-reach areas with this pneumatic tool.

The rust chisel is a light pneumatic hammer on the end of which the actual tool with which you process the surface is installed. Three different versions or plug ends are available for the F+K rust chisels: spherical, hard metal pins and x blades. 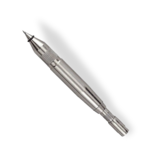 The pneumatic engraving pen is suitable for fine engraving work, for instance, engraving steel and metals, stone, glass and ceramic as well as synthetic materials and plastic. The needle can be quickly and easily replaced so you can re-equip your tool for the next step or use with only a few hand movements. High-quality workmanship, ergonomic design, quiet operation and an extremely precise impact make the engraving pen a safe, reliable and pleasant-to-handle tool.

Turbine angle grinder
With seven-stage turbine motor. Grinding is 60-100% faster compared to classic pneumatic angle-grinders which leads to a massive higher removal rate. It requires no oil and the lifetime is up to 100% higher without additional lubrication.
Angle grinder with vane motor
Lubricated oil can be used to increase the lifetime.

Powerful and productive
Our machines are characterised by powerful air motors with suitable speed. Environmentally friendly because they can be operated without oil. To extend the lifetime it is possible to operate the machines with oil as well.
Easy  to handle
Smooth surfaces facilitate handling the tools in any position. Handiness means increased safety and better results.
Die grinder
Excellent power with low weight.

Extreme powerful machine that can handle very robust grinding tools. Different adapters are available that can be changed simple and fast. 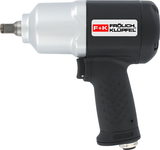 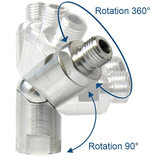 The ideal accessory for your pneumatic tools 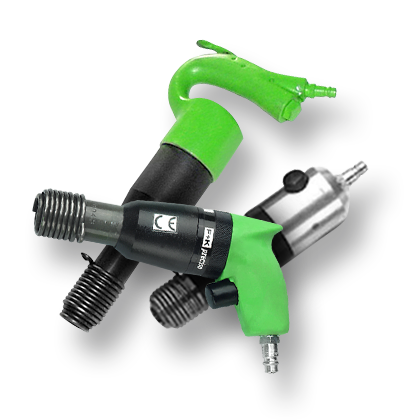 Frölich+Klüpfel – more than 130 years of quality and tradition

The corporate history of Frölich & Klüpfel begins more than 130 years ago – with an invention that laid the foundation for what the company has perfected until today: pneumatic tools. Around 1880, the engineer Julius Frölich devises a pneumatic rock drilling machine, which promptly simplifies the task of excavating stone drifts in mining. Together with the engineer Hermann Klüpfel and with his machine serving as business model, Julius Fröllich founds his company in the Silesian town of Eisleben. Only a few months later, another branch is opened in Barmen and Ernst Book becomes an associate. In April 1891, Frölich relocates the headquarters of his company to the southern Ruhrgebiet region. The production programme is expanded by machines and devices powered by compressed air that are primarily used in mining. Soon, Frölich leaves his company to his fellow associates. Nevertheless, the company and his original pneumatic rock drilling machine keep on flourishing.

Another associate, Hans Stephan, joins the company in 1909. Shortly before that the first big mine shaft was drilled with technology by Frölich & Klüpfel: the “Wilhelmina” shaft in Zabrze (later to be known as Hindenburg in Upper Silesia). Pneumatics in mining proves to be a success story: Until World War I Frölich & Klüpfel expands to Austria, Hungary and the Balkans. Branch offices are founded in Aachen, at the Lower Rhine, in the Netherlands and England. After the war, the services and tools of the compressed air pioneers are still much in demand: In order to meet the growing demands for high-quality pneumatic tools, Frölich & Klüpfel takes over two manufacturing companies in the Ruhrgebiet region.

At the end of World War II Frölich & Klüpfel – like many other post-war companies – loses its production site in Upper Silesia as well as subsidiaries in Vienna and Budapest. The remaining manufacturing and service companies resume their work under difficult circumstances. Some of the first orders come from the Saarland region. During the post-war years, the division for shaft construction and mining gradually expands to more than 1,000 employees. The company remains innovative and lands numerous large orders in Germany and abroad, buys sites and companies and expands its existing plants.

Until the beginning of the 1970s, mining remains the most important industrial sector for Frölich & Klüpfel. On 30 March 1972, the deep mining division takes over the technical management of one of the largest mining projects in the federal republic: drifting at the combined mine Verbundbergwerk Rheinland with a mining drill head of six metres in diameter. Frölich & Klüpfel also played a major role in the construction of the new underground railways in Frankfurt/Main and Essen and the metropolitan railway in Mülheim/Ruhr. Over decades, the company’s competencies in the field of pneumatics that laid the foundation for the business almost 100 years earlier are constantly expanded and refined. In 1973, another pneumatics division is founded in Wuppertal in order to provide customers with a comprising product range of pneumatic tools from one source.

The crisis in coal mining at the beginning of the 1970s is met by a diversification of the company’s portfolio:  The individual company divisions are converted into legally independent units – among them the Frölich + Klüpfel Drucklufttechnik GmbH & Co. KG in Wuppertal that still exists to this day. There is an increasing demand for the original pneumatic tools in other industry sectors. Today, the supply programme comprises a wide range of different pneumatic hammers and tools.

The inventive talent that became the business foundation for company founder Julius Frölich more than 130 years ago does not only make the company the market leader in the field of pneumatic hammers for stonemasons and sculptors. It also forms the basis for further product innovations. For Mercedes Benz for example, engineers from both companies are developing a solution for economically decoring cast parts from different materials like aluminium alloys or grey iron. Aside from pneumatics, the development of special custom-made constructions is one of the core businesses of Frölich + Klüpfel. Important European foundries are just as much part of the company’s satisfied customer pool as companies in China, Japan, Brazil and South Africa. Aside from its long-standing tradition, the company primarily convinces due to its innovative capacity. As an original in the field of high-quality pneumatic tools it still ranks among the most important manufacturers in the world.